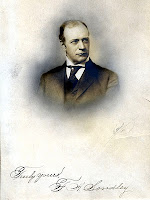 Webmaster's Note: Dr. Sondley usually signed his name "F. A. Sondley," and that was the name he used as author of his books and other writings. His first given name has been seen variously as Foster, Forster, and Forester. His maternal grandmother was Nancy Foster (1797-1862), and many believe that the Foster name was passed down. However, go back two additional generations, and the family surname was Forster, thus giving rise to the possibility that this earlier spelling could have been applied to F. A. Sondley. However, we believe Foster is correct, and that is the spelling used on his gravestone at the Alexander Baptist Church in Leicester, Buncombe County, North Carolina.