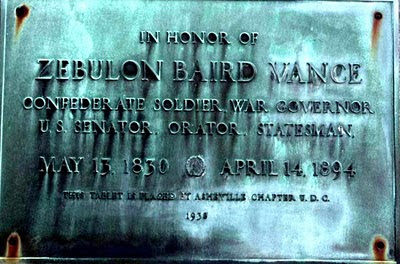 The following is from The Heritage of Old Buncombe County, Doris Cline Ward, Editor (1981) at 84 (Article #65, "Zebulon Baird Vance" by Luther W. Shaw):

Zebulon Baird Vance, whose handsome portrait hangs in the Superior Courtroom of Buncombe County Courthouse, was North Carolina's Civil War governor. Born on Reems Creek May 13, 1830, Vance attended Newton Academy and the University of North Carolina. He began law practice in Asheville in May 1852. Two years later, he was named Buncombe's representative to the N. C. House of Commons and during 1856-1860 served in the U. S. House of Representatives. A captain and colonel in the Confederate Army in 1861, Vance was governor of North Carolina from 1862-1865 and again in 1876. He was elected U. S. Senator from North Carolina on March 4, 1879 and served until April 14, 1894, when he died in Washington, D. C. He is buried in Asheville's Riverside Cemetery. The adjacent portrait was done in 1884 by J. A. Janus.