The Conquest of Canaan 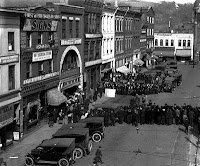 Released by Paramount Pictures in August of 1921, this 35 mm black and white silent film is based on the Booth Tarkington (1869-1946) novel The Conquest of Canaan, written in 1905. The story follows the life of a small-town lawyer, Joe Louden, who endures alcholism and social exclusion, and public ridicule, only to prevail after he earns a law degree, inherits a fortune, and takes on corrupt city officials. [Also based loosely on the John Martin moral treatise, The Conquest of Canaan, (1811), which explores the natural and moral state of individuals in a small town who are both conquerors and conquered in a series of letters from a father to his son.]

The story was filmed in downtown Asheville, N.C., in and around Pack Square, the old Courthouse facing College Street and near the First Baptist Church at the corner of Spruce and College Streets. The old Swannanoa-Berkeley Hotel, later the Earle Hotel, was used as a backdrop and renamed the "Canaan City Hotel" for the film. Streetcars, signs, and other landmarks were re-named for the film and hundreds of extras were hired for the large scenes, particularly the mob-scene on Pack Square. 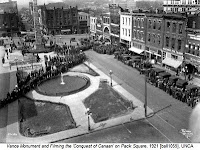 Frank Tuttle wrote the film adaptation of the Tarkington novel and Adolph Zukor was the Producer. The director of photography was Harry Perry. The film was moderately successful in its day and played at the Asheville Imperial, the State, and the Princess theaters [Padgitt, 1950]. It is listed in the AFI Catalog of Silent Films.

It is believed that the Asheville Historical Resources Commission's copy stored at Ramsey Library is the only copy of the film. It was obviously re-copied onto CBEMA film stock at an unknown date. The AFI catalog notes that there were 7 reels in the original film. The reels at Ramsey Library number only 4. The film was discovered in Russia in the 1980's by William P. Banner who produced a special WLOS television program about the film and used a section of the retrieved film. The Russians reportedly used the film with Russian sub-titles to demonstrate cultural aspects of the United States to their people. The English sub-titles of the silent film were replaced by Russian sub-titles at an unknown time between 1921 and the early 1960's. A video copy of the film has been mastered for preservation purposes and CD copies have been reproduced from the video, resulting in considerable loss of quality. The original CBEMA general purpose film has been refrigerated in the D. H. Ramsey Library Special Collections. Access to the original film is restricted, however the copies of the film may be viewed on request in Special Collections.

Any published use of the film requires permission of the Asheville Historic Resources Commission .

"Booth Tarkington's old novel, "The Conquest of Canaan," has been dug up for the screen, but nothing has been done to it to bring it to life. It's at the Rivoli this week, probably because it is a dull season and the hot weather is expected to continue.

When a novel is translated into moving pictures and subtitles it must have some special treatment if it is to seem anything vital, something by way of sharpened characterization, intensification of plot or pictorial enhancement to take the place of the novelist's invigorating words, but in the present case only animated illustrations of no particular distinction have been substituted for the words, and they make a poor substitute.

Thomas Meighan, who takes the leading role, is a nice-looking fellow and he has a certain whimsical manner sometimes that gives his characters a light and agreeable touch, but he scarcely ever creates a living, human being out of an author's fictitious figure, and in "The Conquest of Canaan," he does not even bring to his part the cagy good humor that, for instance, he brought his role in "White and Unmarried." The others in the cast -- Doris Kenyon as Ariel Taber; Louis Hendricks, as Judge Pike; Paul Everton, as Happy Farley, and so on -- are just lay figures without anything to distinguish them from hundreds fo others of their kind on the stage and screen. Nor has the director of the production, R. William Neil, given it any cinematographic individuality.

There have been much worse pictures than "The Conquest of Canaan," and also much better. It's just mediocre. You can't get excited about it either way.

Probably many of those who see it will have a general idea of the story. They will remember that it is about a small town -- possibly it has been revived because of the popularity of "Main Street," which it doesn't resemble very closely -- and they may recall that the leading characters are a disreputable young man, a reputable girl who has faith in him, and a hypocritical "leading citizen" whose sense of respectability is so offended by this young man's scandalous behavior that he becomes his vehement enemy. Why Judge Pike should develop such animosity toward as lowly a person as Joe Louden is not explained -- at least, on the screen -- but he does and Joe is finally provoked to show the town just what and old faker the Judge is. His triumph and the Judge's downfall are supposed to be an exposure of the tyranny and sham of small-town respectability, but the Judge is made so vulnerable that he's hardly typical. It is easy for Joe to dispose Judge Pike, but he would have an altogether different job on his hands with a Judge Pike of real life. That's why "The Conquest of Canaan" isn't convincing. It's too obviously fiction. ... " July 11, 1921, 9:3.