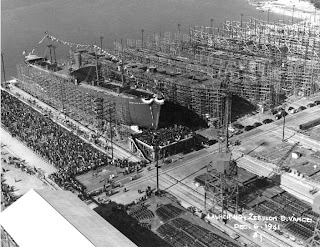 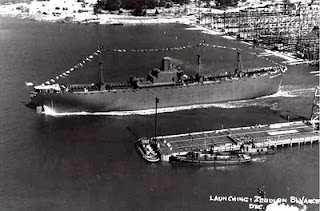 As the United States entered World War II, the military found itself ill prepared for large-scale naval operations. By 1941 German submarines were sinking American and British ships at a rate far exceeding their production. The government asked certain large shipbuilding companies, including Newport News Shipbuilding in Virginia, to produce on government contract much needed cargo ships for the war effort. Newport News Shipbuilding initially declined the government’s request, but in January 1941 announced that it would build the ships in Wilmington, North Carolina, creating a subsidiary company, the North Carolina Shipbuilding Company, for this purpose. This emergency shipyard in Wilmington, along with eight others, geared up to produce 260 ships in 1941—a tall order with a desperate purpose.

Luckily, the new shipyards had templates from which to manufacture prefabricated ships. The Merchant Marine Act of 1936 established a national maritime commission, which produced designs for three standard types of cargo ships. These designs proved invaluable to the high-speed ship production required in 1941. Welding, a new and for the most part untested technique in shipbuilding, replaced the laborious and time-consuming method of riveting steel plates to ship frames.

Each cargo ship measured 441 feet long and 56 feet wide. Two oil-burning boilers fed a three-cylinder, reciprocating steam engine, propelling the ship at a speed of up to eleven knots. The vessels could carry more than 9,000 tons of cargo in addition to transport airplanes, tanks, and locomotives lashed to their decks. They could carry 2,840 jeeps, 440 tanks, or 230 million rounds of rifle ammunition. Newspapers dubbed the ships “ugly ducklings,” and President Franklin D. Roosevelt called them “dreadful-looking objects.” Attempting to present a more positive image, the U.S. Maritime Commission referred to the ships as the Liberty Fleet and proclaimed September 27, 1941, the day the first fifteen ships were launched, Liberty Fleet Day.

Most Liberty ships took the names of eminent people or of cities that had bought a large number of war bonds. On December 6, 1941, the Zebulon B. Vance, named for North Carolina’s governor from 1877 to 1879, became the first Liberty ship launched from Wilmington (Hull #145). Wilmington’s population swelled during the war as people arrived to work for the North Carolina Shipbuilding Company. In 1940 about 35,000 people lived in Wilmington. In 1943, at its peak, the shipyard counted more than 20,000 employees. The workforce included many women, embodied by the fictional poster character Rosie the Riveter. The Wilmington shipyard built 40 Liberty ships in 1942. By the end of the war, 243 ships had come off the line.

The 2,751 Liberty ships produced during World War II proved strong and well built. One ship, for instance, stayed afloat after being hit by two torpedoes. The Liberty Fleet served the United States and its allies admirably, transporting troops and goods throughout the war. The North Carolina Shipbuilding Company played an essential role in the creation of the Liberty Fleet, and thus in the Allied victory.
_______________