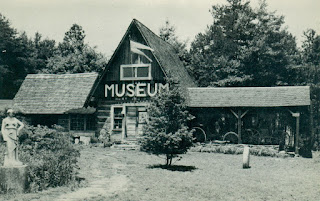 "Running up and down Cane Creek . . . is a wide belt of lime rock from which, for more than a century, quicklime has been manufactured in large quantities on Cane Creek by burning. . . . From this belt of lime rock Limestone Creek, once known by an objectionable designation, takes its name and Limestone Township of Buncombe County is called."

"When certain varieties of quartz and limestone are strongly rubbed, they give off the odor of rotton (sic) eggs. This peculiar smell is occasioned by the evolution of sulphureted (sic) hydrogen ; and substances which possess this property are termed fetid."

Today, Limestone Township is split in half.  One side abuts Avery Creek Township and the other, Fairview Township. Asheville's southern city limits run right down the middle of the township along Hendersonville Road (U.S. Route 25). Arden, Avery's Creek, the town of Biltmore Forest, Royal Pines, and Skyland are familiar communities in the township.  Have you heard tell of Limestone or Shuford(s)ville?

Limestone was located in a much larger Buncombe County in 1827 prior the creation of Henderson County in 1838.  A  post office served Limestone community starting in 1827. Two Murrays, a Spann, and a Whitaker served as postmasters until 1837. In 1837 Jacob Shuford (from Catawba County) married Mary Smith from Asheville. Her father, James Smith, gave the couple a large tract of land in Limestone including a spring that was said to have been used by the Indians. (The spring on the land owned by Jacob Shuford is located just south of the intersection of US 25-A (Sweeten Creek Road) and US 25 according to a citation in Cabins & Castles. Mr. Shuford became the postmaster in 1837.  By 1852 the name was changed from Limestone to Shuford(s)ville.

The Shufordville post office continued operation as a CSA post office during the Civil War. The cancellation during those years was handwritten. 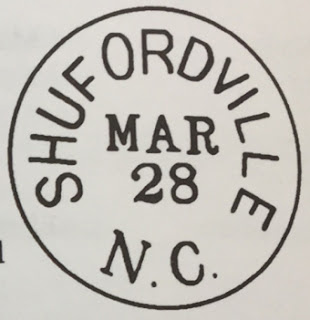 After the Civil War the post office for Shufordville operated from 1870 until 1887 when it was moved into Henderson County and the name was changed to Fletcher which was incorporated in 1886.

Around the same time what was once Shufordville was changed to Arden (named after the Shakespearean forest) and incorporated in 1895.

At the turn of the century the following amusing tale from Limestone Township was printed in the Asheville Citizen. I just couldn't resist letting you read this particular story. I found it more amusing than the ones concerning moonshining and stills in Limestone.

By mid-twentieth century, the settlements of Limestone and Shufordville were almost forgotten. However, in 1945 The Fort Shuford Museum opened consisting of 2 buildings of hand-hewn logs: a museum and an antique shop operated by E. R. Medd and his son. The museum stood just south of the intersection of US 25A and US25, across the road from where the Shuford spring is located.

Mr. Medd and his son were lapidary artists and sold minerals as well.  In the museum there were many curiosities: Japanese dolls, shoes made from human skin, some personal effects of Admiral Perry of North Pole fame along with a life-sized wax body, a real head of an Egyptian mummy, and most intriguingly life-size models of a Ubangi woman's head replete with lip plate/plug and Eng & Chang "Bunker" (1811-1874) the famous Siamese twins who settled in Wilkesboro NC when they left the circus.  In an article from 1952 in the Asheville Citizen, the reporter allowed: "Some things in the museum are beautiful; some are fascinating in a horrible sort of way; but all are interesting.....It is not practical to describe (the) museum in detail."

Post by Terry Taylor, Friends of the North Carolina Room board member