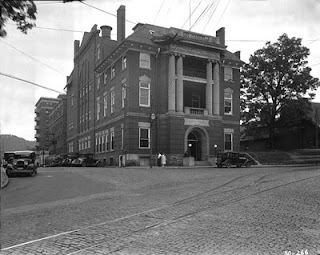 As historian at a Freemasons lodge in Asheville, Mark Bennett wants to make something clear. Despite the impression given by books like author Dan Brown's “The Da Vinci Code” and “The Lost Symbol” and movies like “National Treasure,” the Masons are not a clandestine group. “We're not a secret society,” Bennett says. “We're a society with a few secrets.” A once closed group whose members populated the power-elite from town hall to the White House, Masons are opening their doors to the public in increasing numbers in an effort to dispel myths and boost lagging membership. The Masonic Service Association of North America say membership levels are the lowest in 80 years, despite a bigger share of the public's consciousness thanks to the popular books and movies. There are fewer Masons today — by nearly a million — than there were in 1941 as the country came out of the Great Depression. The fraternity has an estimated 3 million members worldwide, said Richard Fletcher, the association's executive secretary. It had more than 4 million members in the U.S. alone in 1959. Today it has about 1.5 million, he said.

Why? Blame the baby boomers, Fletcher said. “We had what I call the '60s syndrome,” he said. “That was the whole concept of the generation. You turned against anything that was mainstream.” To combat that gap, Masons are opening their doors. In Asheville, the Mount Hermon Masonic Lodge 118 allows prospective members to dine with members before official meetings to learn more about Masonry. The organization's building on Broadway stands as a downtown landmark and was designed by Richard Sharp Smith, the Biltmore Estate's supervising architect. The effort has paid off. Seven years ago the lodge was struggling with low attendance, says John Burchfield, 40th district deputy grand lecturer. It is thriving today with about 500 members, he said. In western Pennsylvania, three lodges in 37th Masonic District hoped to dispel myths last year with open houses in August. In New Hampshire, Freemasons in March and October held statewide events including an open house at the Masonic Temple on Main Street in Nashua.

“It was very well received in New Hampshire,” said Nashua Rising Sun lodge member Bob Porter. “A lot of people were curious about what the Masons are all about.” His lodge got 30 new members. In Massachusetts, Freemasons in 2009 held open houses aimed at educating the community. The event included a display at Washington Lodge of silver jewelry made by Paul Revere. “Open houses are becoming very common,” said Fletcher, of the service association. “In fact, many of the Masonic buildings have always been open to the public; it's just that the public never knew it.” The association produced a report five years ago called “It's About Time,” which encouraged lodges to invite the community in, Fletcher said. It is believed that Freemasonry dates to stonemason guilds in the Middle Ages, according to the association. Its exact origins are unclear. In 1717, four lodges in London formed the first Grand Lodge of England. Women are not allowed, though related organizations, such as the Eastern Star, offer an affiliation with Masons. The all-male policy is not up for debate. Men are also allowed in Eastern Star.

Colonists brought Freemasonry to America. George Washington and Benjamin Franklin were Masons. The Mason decline is mirrored by other fraternities. Amos McCallum, chairman of the past national presidents of the Benevolent & Protective Order of Elks, said his group has 900,000 members, down from 1.6 million in 1980. There's been interest among younger people in joining but new members aren't staying on. “We let too many go out the back door while we are bringing more in the front,” he said. The civic group Elks helps communities and students. Its top scholarship winner will get $60,000 for a four-year degree this year. Membership in Rotary clubs has dropped nearly 42,000 since 1995 in the U.S. to 360,790 last year, though the humanitarian service organization reports an overall increase of 56,000 members worldwide during the same time period. But some civic clubs say they are starting to see an uptick.

Lions Club International reported 20,000 new members last year after decades of decline. It has 1.35 million worldwide, said Dane La Joye, spokesman for the Lions. Reaching out to women has been key, he said. “Women are the fastest-growing segment of our membership today,” he said, “and family clubs, as we call them, are growing year by year.” Family clubs allow parents and children to volunteer and socialize together, La Joye said. That seems to have tapped into American's desire to improve the community, he said. “Surveys show people today want to volunteer as much as they ever did,” La Joye said. “But they tend to want to volunteer with their kids.” The Lions worldwide give $337 million annually to charities and spend 26 million hours volunteering. Masons give nearly $1.5 million each day to charities, the association says, with the most well-known being the Shriners Hospitals for Children.

Freemasonry promotes individual freedom, the right of people to worship as they choose, democratic government and public education. Fletcher said the emphasis is on leadership, though what exactly happens in a Masons meeting is private. Masons have long been the target of conspiracy theorists and today they are tackling the myths head-on. The fraternity denies being part of a “one-world order” or controlling the United States government. That conspiracy theory has centered on the side of the Great Seal of the United States with the “eye in the pyramid” design. The all-seeing eye icon is used in Masonry but, the organization says, the image on the seal, and the back of the dollar, have nothing to do with Masons themselves. The group does not use pyramids in its iconography thought it does use an “all-seeing eye.” The two icons came from the same cultural period, which explains their similarities, the association says.

Masons also dispute other myths including that every U.S. president is a Mason (Obama is not); that Freemasonry is a substitute for Christianity (religion may not be discussed at Masonic meetings though members must believe in God); that Masons are racists (any man may be accepted); and that Masons are a secret society (the lodges are in the phone book). Fletcher can't say, for sure, that membership is picking up across the nation with the open-door policy though he believes that's the case from talking with other Masons. The Internet and the rise of the online social network may have something to do with it, he believes. “Freemasonry is a social network,” he said. “It always has been.”

And maybe Generation X, once known for a slacker mentality and now regarded for entrepreneurial spirit, has more in common with the Greatest Generation than the boomers, Fletcher said. “We are seeing young men who are vastly more educated (in Masonry) than those giving them the degrees,” he said. “They have made the determination that there is something they want in life beyond themselves. It's a swing back. I think the country is in a social change right now. I think many people are looking more toward value-based organizations.” Burchfield, who assists Masons in three Western North Carolina counties understand the 1st through 3rd degrees with lectures, agreed. “I think right now Freemasonry is experiencing an increase,” he said. “Younger people want to know what Freemasonry is all about. They are finding they want to bond with other people with like interests.”

Click on photograph for a larger image.
at 7:44 PM