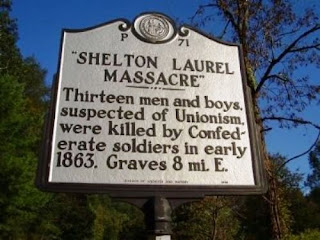 The Shelton Laurel Massacre, which occurred in January 1863, serves as a graphic illustration of the divided loyalties of North Carolinians during the Civil War as well as the tenuous relationship between state and Confederate military authorities. Throughout the war North Carolina's western counties suffered considerable violence and disorder. Strong Unionist sentiment ran through the Mountains, and there was intermittent fighting between residents loyal to the United States and their pro-Confederate neighbors. This situation was reminiscent of the bitter social divisions during the American Revolution. In fact, at times Unionists were referred to as "Tories" by their enemies. Further adding to the chaotic atmosphere were marauding gangs of both Confederate and Union deserters, who took advantage of undermanned local enforcement and a weak Confederate presence to practice rampant banditry and lawlessness.

In early January 1863 Confederate sympathizers near the town of Marshall, the seat of Madison County, suffered a series of raids by Unionist outlaws from nearby Shelton Laurel. Later that month Brig. Gen. Henry Heth dispatched Confederate infantry to the county to quell the disturbances. The operation's harsh objectives made it clear that Confederates held the Unionist renegades in low regard. Heth instructed his subordinates to take no prisoners should there be an engagement. Accordingly, a detachment led by Lt. Col. James A. Keith, a Confederate and native of Marshall eager to avenge the wrong done his townsmen, entered the Shelton Laurel area and embarked on a rampage against the Unionists. Locals were tortured to reveal the names of the bandits, and, once identified, these "Tories" (old men and boys) were apprehended; 13 were eventually shot in cold blood. This brutality brought down upon Keith and his men the wrath of the countryside, and constant sniper fire and attempted ambushes soon compelled them to leave the area.

After the war, Keith was arrested but was spared prosecution by presidential amnesty. No one ever stood trial for the Shelton Laurel killings, North Carolina's worst Civil War atrocity.

John C. Inscoe and Gordon B. McKinney, The Heart of Confederate Appalachia: Western North Carolina in the Civil War (2000).