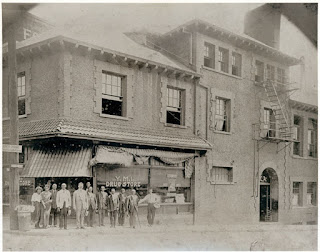 On September 5, 1891, George W. Vanderbilt II purchased land for the Young Men’s Institute in Asheville. During construction of his lavish home in Asheville, Vanderbilt decided to establish a community center for his African American workers. The building, constructed in 1892 and 1893, was designed by Richard Sharp Smith, who was also the supervising architect of the Biltmore House.

The center, known as the Young Men’s Institute or YMI was the true center of the civic, cultural and business life of Asheville’s black community. It featured a gym, bathing facilities, public library and classes for children and adults. By 1910, the organization had its own orchestra. Churches, schools and civic organizations used the venue for gatherings, and a variety of businesses and institutions kept offices in the building, too.

As the YMI grew, it became less connected with the Vanderbilt family, and in May 1906 it was incorporated with 49 of Asheville’s black leaders as board members. During the Great Depression, the YMI became part of the YMCA, and that organization closed the building in 1970. After being condemned and threated with demolition, the African American community in Asheville rallied to save the structure in 1977 and was able to get it placed on the National Register of Historic Places.

The building underwent an extensive renovation in the 1980s and remains a vibrant part of the community as the YMI Cultural Center.

Source: This Day in North Carolina History, a project of the North Carolina Department of Cultural Resources with contributions from the Office of Archives and History and the State Library of North Carolina.
at 12:28 PM