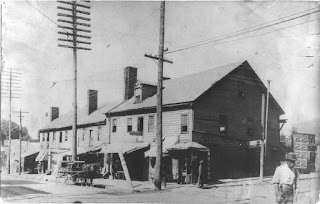 On the southeast corner of North Main and College streets stands what was formerly known as the "Buck hotel." It is now used for a boarding house, clothing and shoe store, repair shop and restaurants. Sixty years ago when 'Squire Summey came to Asheville this building was then a dilapidated old place. The south end was constructed of logs, which were covered with weatherboarding. The building was owned by James M. Smith, a prosperous farmer and merchant. Mr. Smith was the first white man ever born west of the Blue Ridge mountain in this state. He owned all the land from a distance several blocks north of his hotel to the French Broad river on the north, and east to the "Town Branch." His land included what is now Victoria. He died in 1858 leaving much property to each of his children. 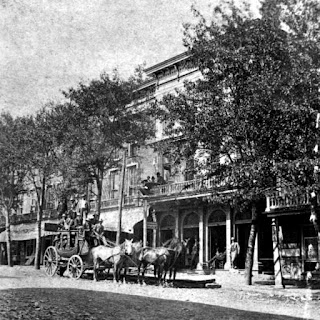 The old Eagle hotel still stands and is now occupied by J. H. Loughran who has a liquor saloon in the building. The structure is nearly 100 years old and was built before the Buck hotel. Mr. Smith, who was afterwards owner of the Buck hotel, clerked for Mr. Patton who owned the Eagle hostelry. This was the first three story building ever erected in Asheville and it was a proud sight to the people of this section of the county. It is built much on the order of the present court house, very solid and plain. The post office was formerly located therein. On the corner of Eagle and North Main streets, sometimes called "Greasy Corner," is an old wooden structure that was formerly occupied by Dr. J. F. Hardy. It was a pretty comfortable home at the time the doctor lived there, having a beautiful lawn with large trees in the front. Though this building is not a landmark, it is one of the first dwellings built in Asheville village.

Two buildings, that have recently been razed, were interesting from a reminiscent standpoint. Mr. Harkins, the grandfather of Collector H. S. Harkins, built the Methodist church on Church street nearly a half century ago. This building within the last few weeks has been torn down and a handsome new edifice will soon be erected on the site of the old church. Where the beautiful new court house is now being built there stood a few months ago a frame dwelling that was attractive in many ways. When they looked at it one was reminded of the historical sketches read about broad verandas, large rooms, high ceilings and immense fire places.

It is interesting to know that there are only two citizens of Asheville who were here 60 years ago and have lived here since that time. They are Capt. T. W. Patton and 'Squire A. T. Summey and to them is due credit for all of the facts contained in this article. Captain Patton was born in the Eagle hotel in 1841 and is of Irish descent. He has been identified with nearly every notable event and feature of public progress that has advanced this town from a hamlet to a village and a village to a city. Under his administration as mayor the public improvements, such as street paving and the building of the present water works, were conducted with vigor yet with watchful economy, and the good work has had an imperishable effect in promoting the spirit of civic pride and enterprise that is today so alive and strong in Asheville.

The Captain Patton of today is the man of yesterday and of ten years ago -- hale and hearty and interesting in all that adds honor and valor to life in the city of his birth. Most of his time is devoted to looking after his personal business interests. "Prison charity" of late years has enlisted his interests strongly and he has done much sensibly practical work in this direction. He was a captain in the confederate army and an adjutant in the Spanish, American war. He fought in several famous battles and has always preserved a special affection for the men with whom he underwent the vigorous campaign of the '60's. In the Spanish-American war, to which he also enlisted, accompanying the Asheville boys to Cuba, he remembered the former hardships of the soldier's life and did much to overcome the troubles that beset his comrades. When there was delay in the government's paying the soldiers, for some reason, Captain Patton personally saw that the boys were supplied with money and at one time when he did not have the ready cash he wrote to George W. Pack of this city and secured the loan of $500.

In passing it may be said that Captain Patton is the bane of a negligent jail keeper's existence. In interesting himself to see that the prisoners are treated with humanity he is liberal with expressions of disapproval when the wards are untidy and the prisoners mistreated.

'Squire Summey came here 60 years ago when Asheville had 500 population. He has held more offices probably than any other man in the state. He was United States commissioner for 25 years, city treasurer 16 years, justice of the peace 40 years, chairman of the board of education 6 years, and mayor five years. He was born in Lincoln county and was in business with Captain T. W. Patton for many years. 'Squire Summey's reminiscences of Asheville of "ye olden time" would fill a volume. The city is much his debtor for the years of his public service faithfully performed. Under his mayoralty administration as under Captain Patton's the city went forward and lasting monuments were built as to the good work done.

It was only 22 years ago that there was a stage coach running between Old Fort and Asheville. The first train to Asheville came to Biltmore which was the terminus of the road. At first thought it would seem that there are many things in Asheville that would furnish much interest to those who are particularly fond of recalling and studying the conditions of early days. In the last edition of the Sunday Gazette a history of the court houses of Asheville was given. The story revealed the fact that within a little over 100 years five court houses had been built. This will give the reader somewhat of an idea of the growth of Asheville for hardly a court house in the state is less than 50 years old and in many instances they are the remodeling of old structures. It seems to have always been the policy of the citizens of this place to build anew instead of adding to and remodeling. To those who think that they have seen buildings that can be classed as landmarks, investigate a little and they will find that their suspicions were not well founded. There are several buildings in the city that the writer learned the history of since their dilapidation gave them the appearance of being extremely old. It was found that poor construction was generally the cause of the aged looking exterior. A little building that is point out to strangers and excites interest is the shoe shop in Spruce street, just around the corner from College street. It formerly stood on the corner where the First Baptist church building now stands and was then the law office of Senator Zebulon B. Vance.
_______________