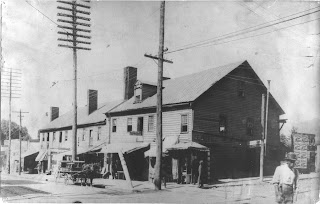 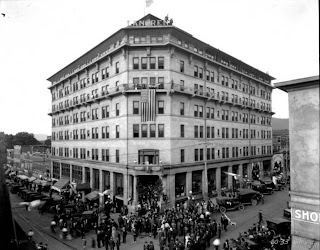 "With View From the Top, Wilcox Keeps Faith in Future"

From his office, [Glenn] Wilcox has been watching demolition of the parking garage across College Street where he and new partner John McKibbon have plans for an AC Marriot Hotel. McKibbon previously developed the Aloft Hotel on Biltmore Avenue only two blocks away.

After the AC opens in July 2016, Wilcox and McKibbon will turn their attention to a rehab of the 50-year-old BB&T Building into a boutique hotel and luxury condos on the top floors.

Wilcox dismisses worries that Asheville is building a glut of downtown hotels. "If you build it, they will come. It's all 'location, location, location.' John McKibbon told me I had the two most promising properties in the Southeast."

"The Gospel According to Jerry: The No-Tell Hotel"

A few thousand years from now, archaeologists sifting through the ruins of the ancient town of Asheville will determine that the Langren Hotel once stood alongside the French Broad River.

That's because we put it there.

The story begins in 1964. My partner, Jack Doloboff, and I were in the surplus and salvage business, and we'd even done a couple of small-scale demolitions: a little hotel on Patton Avenue and Montieth's service station (which stood at the corner of Coxe and Patton).

We found out that the Langren was going to be demolished to build a parking garage for the Northwestern Bank building, Asheville’s first new skyscraper since the Jackson Building back in the 1920s. We succeeded in buying the contents of the building, including all the furniture and fixtures, and we had 60 days to remove them.

Our first step was touring the still-barely-operating hotel. Once a premier commercial hostelry, it had deteriorated into a flophouse and a base for ladies of the night. Barney Woodson, a proper Southern gentleman who was the Langren’s engineer, showed us around the mostly empty building. When we passed certain doors, he would giggle, indicating that some commercial activity was still taking place. Woodson later became chief engineer of the new Northwestern Bank building and was succeeded by his son, Barney Woodson Jr.

We set up shop at the front desk, and business was brisk, thanks in part to plugs by beloved WSKY radio personality “Farmer Russ” Offhaus on his popular morning talk show.

We literally sold the contents to the walls. Whole rooms went for $25, including furniture and fixtures (even the old clawfoot tubs and doors). Some people went so far as to take up the ratty carpet, which you could practically see through.

I’ve watched people buy the most ridiculous items at liquidation, estate, bankruptcy, distress and going-out-of-business sales, and I’m convinced that many are motivated by the idea that owning a talisman from a dead person or entity will somehow stave off their own death wish.

There was lots of marble in that old building, which customers would buy and remove from the walls. In the men’s room, there was marble behind the urinals, and when the buyer removed it, he got a big surprise: scores of men’s billfolds lodged in between the stone and the wall.

We could only surmise that the ladies had rolled some of the drunks they were entertaining, and this was a convenient place to dispose of the evidence.

In the midst of all the chaos, though, folks would still show up sometimes and try to rent a room. My partner had a really difficult time convincing a young, just-married couple with a cardboard suitcase that they couldn’t stay in the hotel where their parents had spent their honeymoons years ago.

The bid for demolishing this eight-story building had been awarded to Garland E. Crouch, a hard-driving, hard-drinking bull of a man who was the best house mover ever to operate in these parts. G.E. was what we called a “level-headed feller.” He chewed tobacco, and the juice ran down both sides of his mouth at the same time. His foreman was none other than the infamous Harry P. Clay, who later became high sheriff of Buncombe County.

Around that time, I was in Knoxville and ran into Ralph Sweat, a building dismantler. I told him about the contract and after looking at the building, he agreed to take it down for half the bid price. We bought the contract from Crouch, subbed it to Sweat and split the profit.

Apparently, however, Mr. Sweat didn’t realize that this was a poured-concrete-and-steel-reinforced structure (which was rare in those days), and Lady Langren didn’t gracefully succumb to his assault. The building was finally demolished, though, and the rubble was carted off to a Riverside Drive site whose whereabouts shall remain undisclosed until those future archaeologists figure it out.

Is this a great country or what?

Asheville native Jerry Sternberg, a longtime observer of the local scene, can be reached at gospeljerry@aol.com.

Source: "The Gospel According to Jerry: The No-Tell Hotel" by Jerry Sternberg, Mountain Express (Asheville, North Carolina), 27 July 2014.
at 11:11 AM