In 1898, Allen Turner Davidson (1819-1905), wrote an article on certain Asheville events of note that was published in the Asheville Citizen:

We thought this confusion finally had been sorted, but Allen Turner Davidson made the following comment in the above-referenced article with respect to the arrest of horse thief Delk:

". . . . I know this fact from the further fact that my father, William M. Davidson, the son of the William Davidson at whose house the first meeting to organize Buncombe county was held, and Goldman Ingram, grandfather of John L. Cathey, clerk of the superior court of Buncombe county at this time, arrested Delk at the Little Tennessee river near where it is now spanned by the iron bridge east of Franklin, after he had crossed the ford to the Franklin side of the river. . . ."

The problem is caused by Allen Turner Davidson's reference to his grandfather: ". . . at whose house the first meeting to organize Buncombe county was held . . ."

The ability to discriminate between these two named William Davidson, one Colonel and one Major, had been, in addition to their military titles/ranks, the fact that Colonel William Davidson was the one involved in the creation of Buncombe County and at whose house the first county organizational meeting was held.

"Allen Turner Davidson, another grandson of Colonel David Vance, and a grandson of Major William Davidson, who was one of the first settlers in Buncombe County and lived at the mouth of Bee Tree Creek, was the son of William Mitchell Davidson and was born on Jonathan's Creek in Haywood County, North Carolina, May 9, 1819. . . ."

However, historian John Preston Arthur agrees with Allen Turner Davidson with respect to which William Davidson was the grandfather:

"He [Allen Turner Davidson] was born on Jonathan's creek, Haywood county, May 9, 1819. His father was William Mitchell Davidson and his mother Elizabeth Vance of Burke county, a daughter of Captain David Vance of Revolutionary fame. William Davidson, first senator from Buncombe county and a soldier of the Revolutionary War, was the father of William Mitchell Davidson, and a cousin of Gen. William Davidson who was killed at Cowan's Ford. . . ."

"Do not confuse Major William Davidson with Colonel William Davidson, who lived on the south side of Swannanoa, just below the later town of Biltmore and was a member from Rutherford County of the North Carolina House of Commons and introduced a bill to create the County of Buncombe. Afterwards that county was organized at his home and he became in 1792 its first State Senator. He was born in Virginia and was a cousin of Major William Davidson and General William Davidson. He became quite distinguished and influential in the State of Tennessee to which he removed, died, and is buried. . . ."

Did Allen Turner Davidson not know the history of his grandfather William Davidson? Did he chose the arguably more important Colonel William Davidson to enhance his own stature? Who is more persuasive, John Preston Arthur or Forster Alexander Sondley?
at 7:48 AM No comments: 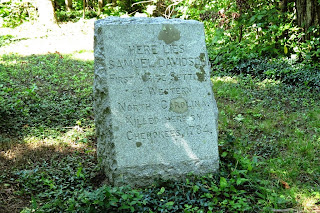 An address delivered at the commemorative exercises when the monument was unveiled September 25th, 1913 BY F. A. Sondley, LL.D. His Great-Great-Grandnephew Samuel Davidson

Clan Chattan is a celebrated confederation of clans, or confederated clan, of the Scottish Highlands, founded in the reign of David I of Scotland, commonly called Saint David, (i 124- 11 53), and is composed of the clans or septs of Macintosh, MacPherson, MacBean, MacDuff, MacGillivray, MacQueen, MacDhai (or Davidson), Shaw, Farquharson and five others. Its emblem is the boxwood and, later adopted, also the red whortleberry, and its battlecry is "Creag dhubh chloinn ChatJiin" (The black craig of Clan Chattan). In several editions of the Waverley Novels a cut of its coat of arms is placed at the head of the preface to The Fair Maid of Perth. This coat of arms bears the motto of the clan, "Touch not the cat but a glove," and two cats rampant. Every of the confederated septs has its own tartan. That of the Davidsons may be found in "The Scottish Clans and Their Tartans." Clan Chattan derived its name from that of its founder and first chief, Gillecattan Mohr (Gillecattan the Great). Gillecattan is a Gaelic name signifying "Follower of Saint Cattan," a once popular Scottish saint. Cattan means a little cat or a kitten. It is manifest that the coat of arms of the clan, as well as its motto, has reference to the signification of the name of the confederation, Clan Chattan.
Read more »
at 2:45 PM No comments: 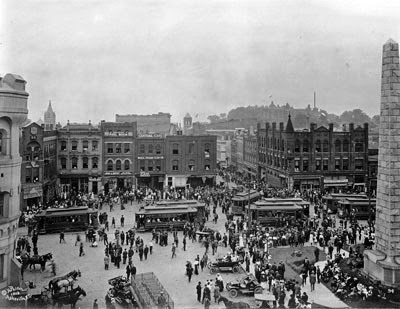 Asheville Streetcar System Launched
at 11:02 AM No comments:

Arrangements are being perfected for a reunion of the Alexander and Davidson families at or near Swannanoa on August 26.

James Alexander, better known as "Jimpsey" Alexander, and Maj. William Davidson, the ancestors of these two families of which there are nearly a thousand living descendants scattered throughout the country, were of the famous Scotch-Irish people who settled the Piedmont section of North and South Carolina, and were especially prominent in the discussions of the questions which led to the Revolution, in which they took a very active part. Immediately after the close of the Revolutionary War the two above named pioneers crossed the Blue Ridge mountains in company and purchased lands adjoining each other and settled on the Swannanoa River at the mouth of Bee Tree creek.

These pioneers were closely related by family ties as well as political and religious associations and ideas. Their descendants have until the present day owned and occupied the lands which their forefathers acquired. During all this period their relations have been close in every walk of life.

The descendants of both of these families are now to be found throughout the United States, and many of them have borne honorable parts in the public event's of the country.

It is desired by those interested in the reunion to assemble as many of the descendants at or near the old homesteads as possible, and every person who is nearly or remotely related to or connected with either or both of these families is cordially invited to attend and this publication will serve the purpose of extending that invitation to those who may be overlooked in any special invitations which may be issued.