Trolleys in the Land of the Sky 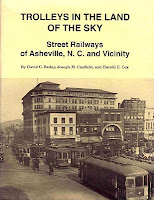 New acquisition for our library:

The history of street railway development in Asheville, North Carolina, dates from about 1880. However, the true trolley era did not begin until 1889 when an overhead electric trolley system was placed in operation by the Asheville Street Railway.