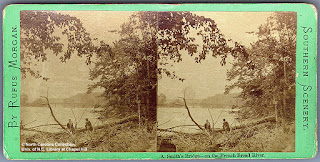 "A Tale of Two Bridges: How the Smith-McDowell House is Tied to Spans of the French Broad River" by John Turk

How did the builder of the Smith-McDowell House make his money? The old-fashioned way: he earned it. At first his fortune was based upon real estate; in 1826, he bought the land on which he would later build the house. But this was just the beginning. While he eventually built an empire based on earnings from his hotel, general store, and other enterprises, his first real moneymaker was a bridge.

In the 1820s, the Buncombe Turnpike was constructed to replace and organize myriad trails used to herd livestock from Tennessee and North Carolina to railroad connections in South Carolina. In Buncombe County, a good deal of this turnpike ran along the east bank of the French Broad River. Smith immediately identified a problem: How do the thousands of small farmers on the west side of the river get their livestock across the river so they can hook up with the turnpike? His solution: build a bridge.

Smith's Bridge was constructed in the early 1830s. According to Dr. Richard W. Iobst's The Smith-McDowell House: A History, it was a simple wooden bridge with wooden railings and a plank floor resting on stone pilings. Smith charged tolls ranging from 50 cents for a loaded four-horse wagon to one cent for a hog. (Remember that these are 1830s dollars!)

Eventually there would be competition from other bridges, but for at least ten years Smith's bridge was the only way across. Smith maintained his bridge until the mid-1850s, when he sold it to Buncombe County. After the Civil War, Smith's bridge experienced periods of gradual deterioration and temporary repairs. In 1881 it was removed and replaced by an iron structure. That bridge was washed away in the flood of 1916 and was replaced with a seven-span concrete arch bridge in 1917. This last bridge was closed to traffic in 1978 and replaced with the present I-240 bridge.

In February of 1898, Robert Garrett's daughter Mary was wed in the Smith-McDowell House. The groom was Robert Pulliam Johnston, who was bon in 1870 in Burnsville and moved to Asheville in 1881. After graduating from West Point in 1891, he was assigned to the Engineers Corps and served in the Spanish-American War and then Stateside. Eventually, disillusioned by the realities of military life, he resigned from the army and returned to Asheville.

When it became obvious that Smith's bridge was not sufficient to handling the increasing flow of traffic across the French Broad River, Johnston was commissioned to design and construct a second one: the West Asheville Bridge, completed in 1911. Its soaring concrete arches and extended entry ramps crossed the river in the vicinity of Haywood and Clingman roads--less than half a mile south of Smith's Bridge.

Johnston's was the only bridge to survive the massive flood of 1916, but in 1972 it was dynamited to make room for the New West Asheville Bridge.