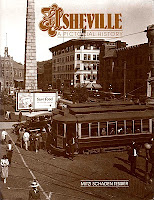 Nestled in the blue mountains of western North Carolina, Asheville has long been a favorite spot for vacationers who enjoy its scenic beauty. But there is another Asheville, a close-knot community beloved by residents throughout the years. Now, in a limited-edition treasury of pictures, which chronicle the growth and development of the city, Mitzi Tessier explores all aspects of this special place, from its beginning as a watering stop for travelers to its present position as a leader in fields ranging from industry and health to art and literature.

In over 300 photographs, many of them rare, previously unpublished views, we are treated to scenes ranging from the simple dignity of the boardinghouse that was Thomas Wolfe's childhood home to the splendor of the Vanderbilt's Biltmore mansion. Well-known citizens appear: James McClure, Mamie Spears Reynolds, Charles Robinson, Hubert Hayes, Roy Trantham, and many others prominent in Asheville history. But unknown individuals are also pictured, in moments ranging from the grand and glorious to the quiet and intimate. Caught for a moment in time, they remind us of the unique spirit of Asheville, its warmth and its beauty. It is a unique heritage, beautifully portrayed, and anyone who has ever lived in Asheville will treasure this vision of the way things were, and the way things are.
_______________ 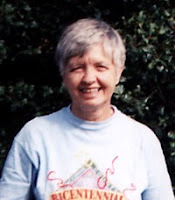 Mitzi came to Asheville with her husband Jack and two children in May, 1953. Jack worked with Sears Roebuck, while she was involved with St. Paul's Methodist Church and the PTA. She became a field advisor for all Buncombe County for the Pisgah Girl Scout Council. She taught at Erwin High School, working with students with learning difficulties. During this time she was asked to sponsor the square dance team. As enthusiasm for dancing grew, she traveled with the teams all over the country. She became involved with the development of the Urban Trail, editing and reducing the information contained on the various plaques that were set up all over downtown. She has a degree in journalism from Louisiana State, and she published 2 books - 1982 - Asheville, a Pictorial History and 1992 - The State of Buncombe.
_______________