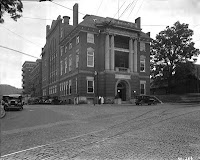 The following appeared in the 20 April 2010 online edition of the Citizen-Times (Asheville, North Carolina), which retains all rights:

Asheville — Tucked away in a mysterious brick building downtown, a windowless, ornate room sat darkened late last week. Then J.R. Yarnall flipped a light switch, illuminating beautifully-restored hardwood floors, a new multi-color paint job and a lone, gold star painted on the ceiling. “A few months ago, this was powder blue carpet that was put down in 1983, and really light, washed out blue walls with plain white trim,” said Yarnall, master of Asheville's Masonic Lodge. The Mt. Hermon Lodge is undergoing renovations focused on painting walls, redoing trim and ripping up carpet and linoleum to refinish the underlying hard pine floors. But members also hope to remake part of the lodge into a game room and possibly add a small gym. The renovations to the building, an architectural gem designed by Richard Sharp Smith, who helped plan Biltmore Estate, are costing the lodge somewhere “in the low six figures,” Yarnall said.

To help fund the renovations, the lodge plans to eventually host a series of monthly concerts, a return, Yarnall said, to its early days, when it was open to the public and hosted dances. “Somewhere in the '20s, we kind of turned in and quit opening the building to the public,” said Yarnall, a construction company owner. “We're really looking to change that now, because it's such a tremendous resource for the community.” In the coming months and years, Yarnall said the lodge hopes to increase public access through concerts, a possible showing of classic horror films, and through a collaboration with local colleges and community groups to help preserve the building and its contents.

Asheville-Buncombe Technical Community College students studying decorative techniques and restoration may help with the renovations, instructor Tim Hanlon said. “They (the Masons) were hoping we could help them a little with the labor, and maybe help them come up with some color palettes that would be appropriate for the time period and its current use,” Hanlon said The lodge is massive – 40,000 square feet. When construction wrapped up in 1915, more than 600,000 bricks had been shipped from Tennessee. It is also deeply steeped in history. “In the flu epidemic during World War I, none of the hospitals were willing to take non-Caucasian patients,” Yarnall said. “So we brought the Red Cross in, and this was the hospital for everyone who wasn't Caucasian.”

Inside and out, Masonic symbolism abounds. Every lodge is a symbolic representation of King Solomon's temple, according to Yarnall, and the lodge is “symbolically oriented east and west, north and south.” In the main lodge room, where the single gold star adorned the ceiling, members plan to paint additional stars, forming an image of Orion's Belt. On the third and fourth floor, a little-used theater will be renovated and will play host to concerts and other events. “That will be a midnight blue ceiling with the Zodiac around, and then primarily reds and golds — a very classic, 20s or 40s-style theater paint job,” Yarnall said.

Carroll Melton, a McDowell County resident who belongs to Joppa Lodge, the Masonic Lodge in Old Fort, is an honorary member of Mt. Hermon Lodge. Melton, 86, said his first memory of the lodge dates to 1961. For a time, he worked for an insurance company, where he saw many examples of poorly-constructed buildings. The lodge is different, he said. “There are no external cracks in the exterior of this building,” he said. “The basement walls and foundation are built from granite rock about two feet thick.” In the 1950s and 60s, a one-armed secretary lived in the lodge, Melton said.

Yarnall said some people remain confused about Masonry, which he described as an organization “for people with a lot of character and a lot of integrity who are living a good life and being good individuals.” Masons do not recruit, but anyone interested in joining the 175 or so members of the Mt. Hermon Lodge need only talk to a Mason. Dues are cheap — only $75 per year — and no alcohol is allowed in the building, in accordance with the moral standards the lodge asks its members to uphold. Potential members of the fraternal organization undergo a thorough investigation and entry process. “Masonry is a very tight knit community, but it's not a very exclusive community, and that's one of the things a lot of people don't understand about it,” Yarnall said. “We have very high standards, but we welcome people into the community.”
_______________

Asheville's Masonic Temple is the home of the Blue Lodge, Mt. Hermon Lodge 118,chartered in 1847 and the Asheville Chapter No. 25 of the Royal Arch Masons, chartered in 1852. Alternately referred to as the "Masonic Lodge" and later the "Scottish Rite Temple," the name emblazoned on the lintel above the paired Ionic columns. Planning meetings were held for the construction of the new temple between the Mt. Hermon Lodge 118 and the Asheville Chapter, the Lodge of Perfection No. 1 in 1909 and in 1912 a location on Broadway was decided upon by the nearly 500 member order. The structure located at 80 Broadway in Asheville, is the design of Richard Sharp Smith of the architectural firm, Smith and Carrier, who was formerly in the employ of Richard Morris Hunt, the architect of the Biltmore House. Smith designed the Masonic Temple in the same year that he founded the North Carolina chapter of the American Institute of Architects.

The building was completed in April of 1913 by the J.C. McPherson contracting company. It is constructed of pressed bricks manufactured by Alex C. Scott Brick Co. of Knoxville, TN. The four-story building is trimmed out in limestone and gray brick with a grey granite foundation. The shallow first floor is rusticated and the Norman arched entryway is framed by terracotta tile. The bracketed, hipped red tile roof covers the front section of the building and a gabled roof rises over the great hall, to the rear of the building and accommodates the 24 large panoramic back-drops used in the Masonic ceremonies and rituals. The facade is graced by a limestone portico that reaches two stories and is fronted by four paired Ionic columns. Above the columns is a broad lintel with "Scottish Rite Cathedral" written on it and above the lintel rests a small balcony with a balustrade, accessed from the fourth floor.

The interior of the building is spacious and once contained a bowling alley and a shuffle-board court, remnants of which may be seen today. Planning of the original structure called a multiple-use building with a grand library, or reading room on the first floor, near the entry (still in place today) and the main offices and secretarial area just off the large lobby. On the first floor to the rear is a large dining room and the kitchen. The upper stories were to serve the various branches of the Lodge, including the activities of the Blue Lodge and the American or York Rite bodies, on the second floor. On the third floor the plan was to accommodate the activities of the Scottish Rite bodies. This plan was roughly followed in the building's purposes over the years.

On the Woodfin street elevation, the brick wall is relieved by a large and graceful three-story blind thermal window. In April of 1919 the Masonic Temple Board bought the lot and the boarding house, known as "The Ozarks" next to the Temple for a price reported to be $15,250. The boarding house was soon removed to another location and the added lot became the current parking area next to the Temple.

The Masonic Temple and the Mt. Hermon Lodge members were very active in the civic affairs of Asheville. The membership during the late 1900's and early 1920's was well over 700 member, with 1920 being the highest membership year (some 800 members). The capacity of the Temple was limited and the large membership resulted in the creation of a number of smaller lodges in western North Carolina, as the Mt. Hermon Lodge has served the entire western region for many years. Many civic leaders were active members of the fraternal brotherhood and their names signal the deep cooperation this organization gave to the city of Asheville. Individuals such as Robert Brank Vance (1828-1899), who was a past Grand Master of Masons of North Carolina and served in many capacities for the state of North Carolina. In 1881 he served as the Methodist church delegate to the ecumenical conference in London, England and is well-known as an author and lecturer across the state.

Robert Brank Vance Past Master of Mt Hermon Lodge and Past Grand Master of Masons of North Carolina. Born in North Carolina, April 24, 1828. General in the Confederate Army during the Civil War; U.S. Representative from North Carolina 8th District, 1873-85; member of North Carolina state legislature. He declined re-nomination in 1884, but took an active part in the Democratic campaign of that year, and in the following spring was appointed assistant commissioner of patents by President Cleveland. He also attained prominence in the masonic order as grand-master for his State, in the Methodist church as delegate to general conferences and the ecumenical conference in London in 1881, and as a lecturer and author.

Fred Seely, the architect and manager of the Grove Park Inn and later the Biltmore Industries was an active member and a 32 degree Mason. Inclusionary in its membership, many in the Jewish community were members. However, the African American community maintained its own brotherhood and Masonic Hall, but coordinated events with their white brothers. 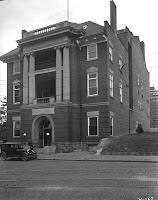 The Ancient Free and Accepted Mason is a fraternal order with a worldwide membership, thought to have arisen from practicing stone masons and cathedral builders in the early Middle Ages. The lodge, first formed in early 18th-century England, is the basic organizational unit. Philadelphia Lodge, formed in 1730, is the oldest Masonic lodge in the United States. The Mount Hermon Masonic Lodge of Asheville was chartered on December 13, 1848, with 107 members, and counted numerous civic and political leaders among them. The lodge had no formal meeting place for more than 50 years until 1909, when the 500 members passed a resolution to acquire a site for the Masonic Temple.

The local architectural firm of Smith & Carrier designed all the fraternal organizations in Asheville, including the Elks Home, Eagles Home and the Asheville Club. The Masonic Temple, designed in 1913 and occupied in 1915, is the only fraternal building that retains its original use. Fronting on Broadway, the striking edifice features robust brickwork and is dominated by a tall portico of paired Ionic columns and a three-story, blind arched window on its Woodfin Street side. The first floor includes offices, fireproof vaults for Masonic records, lodge rooms, banquet hall, massive fireplaces and columns of iron. The second and third floors are used for gatherings of the Masons and the Scottish Rite.

In the years following the completion of the Temple, Mount Hermon Lodge realized Asheville was becoming a health resort, and a committee of doctors suggested that sojourning sick brethren be given attention, which led to the foundation of Asheville's Good Samaritan Mission. The Lodge set an example for the Mission in 1918, during the terrible Spanish influenza that swept through the country, when the members turned over their entire lodge as a hospital for ailing African Americans in Buncombe County.

The year 1920 marked the temple's highest membership with 800 members, which led to the formation of new lodges. As the oldest fraternal organization in western North Carolina, the Mount Hermon Lodge was instrumental in the creation of 40 other Masonic temples in the region.

The Masonic Temple is located at 80 Broadway St., at the corner of Woodfin Ave.,within the Downtown Asheville Historic District. The building is not open to the public.