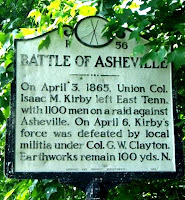 Asheville — When word came in the waning days of the Civil War that Union troops were advancing on the city, Col. George Wesley Clayton hastily assembled a ragtag group of Confederate defenders. Historian Jeff Lovelace believes that without Clayton's successful defense of the town of 1,200 in the Battle of Asheville, the consequences would have been dire. “The town would have been burned,” he said. “Every home would have been looted and pillaged and robbed. The womenfolk would have been terrorized. It would have been unpleasant to say the least.” Clayton's descendants and Civil War re-enactors honored his legacy Saturday with a burial site rededication service at the Clayton family cemetery on the grounds of the Crowne Plaza Resort in Asheville. The small cemetery, in a wooded plot next to the tee on the seventh hole, holds several Clayton family graves. Sisters Nellie Clayton Holleman and Nan Holleman Waite, both of Atlanta, are great-granddaughters of Clayton. They saw the gravesite for the first time Saturday and learned of it only weeks ago from Lovelace, a local author and founder of the Battle of Asheville Commemorative Corps. “We had no idea he was here,” Holleman said. “We're very proud of our name and we've heard the history of the Clayton family all our lives.”


The Battle of Asheville occurred on April 6, 1865, three days before Lee surrendered to Grant at Appomattox. Union Col. Isaac Kirby of 101st Ohio Infantry had set out from Greeneville, Tenn., with 900 troops and an estimated 200 partisans and Confederate deserters, according to the N.C. Department of Cultural Resources. With word of their approach, Clayton, Asheville's highest-ranking officer at the time, called upon the Home Guard to defend the city. The 44-member “Silver Grays,” who counted among their ranks a 60-year-old Baptist minister, were bolstered by about 250 more men that Clayton “bullied, argued or shamed” into taking up arms. Clayton, a West Point graduate, gathered the men and two cannons and marched them to earthworks that overlooked the French Broad River. “He was able to rally the troops and lead the defense of the city that day,” Lovelace said. Lovelace acknowledges that some question the significance of the battle because there were no Confederate causalities and just two Union soldiers are believed to have died. He disagrees. “If they had decided to open the gates to Asheville, then Asheville would have had a very unpleasant fate,” he said. 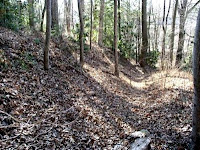 Battle of Asheville. One of the last Civil War actions, the Battle of Asheville was a five-hour standoff between Union and Confederate forces that occurred on the northern outskirts of the city during the afternoon and evening of 6 Apr. 1865. The site of Confederate recruitment camps and a rifle factory, Asheville had once aspired to be the "capital of the Confederacy" because of its geographic centrality. Yet it was spared in Federal raids from East Tennessee until the war's final month. Col. Isaac B. Kirby led 900 Union troops of the 101st Ohio Infantry from Greenville, Tenn., into North Carolina, moving down the French Broad Valley with orders to "scout in the direction of Asheville, N.C." Along the way, Kirby's men burned bridges, stole horses, confiscated rations, and added Confederate deserters to their ranks. Only as they reached the Sondley and Woodfin farms within four or five miles of Asheville were local residents alerted to their approach.

Confederate colonel John B. Palmer, stationed in the city as an administrator of the state's Western District, was able to muster only 100 to 150 men, some regular troops home on leave and the rest Home Guardsmen. They moved out of the city with two or three cannons in time to encounter Kirby's forces on a field previously fortified with trenches and earthworks beside the French Broad River. Details of the battle remain sketchy, but the trenches and cannon fire seem to have led the Ohioans to assume that they faced a more formidable force than was actually the case. Kirby also received false reports listing 2,000 men and 20 cannons in Asheville, with reinforcements moving in from surrounding areas. Darkness and stormy weather led him to abandon further efforts to take Asheville; instead, he ordered his men to retreat.

The local victor proved short-lived. Two weeks later Maj. Gen. George H. Stoneman's cavalry raid, which moved through western North Carolina and Virginia in March and April, approached Asheville, moving west from Burke and McDowell Counties. Although no official word of Robert E. Lee's surrender at Appomattox had reached either Stoneman or local Confederates, both sides agreed on 24 April that Union forces would march unchallenged through Asheville en route back to Tennessee. But the same Federal troops returned to Asheville a day later, this time pillaging the town, burning the armory, and harassing both male and female residents.

April 03, 2010
Battle of Asheville 145th anniversary commemoration
Location: Botanical Gardens of Asheville, at the corner of W.T. Weaver Blvd. and Broadway at the northern gates of Asheville.
Contact: Col. Jeff Lovelace
Address: 31 Salem Avenue, Asheville, N.C. 28804
Phone: (828) 243-5806
We have an impressive lineup of guest speakers for our event. The troops will perform a military demonstration and we plan to have live Civil War music played by a nationally acclaimed artist. 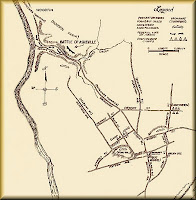 On April 3, 1865, Colonel Isaac M. Kirby of the 101st Ohio Infantry was ordered to “scout in the direction of Asheville.” He set out from Greeneville, Tennessee, with 900 troops and an estimated 200 partisans and Confederate deserters who had taken an oath of allegiance to the United States. After camping at Warm Springs on the first night, Kirby decided to leave the cannons and wagons there under heavy guard and proceed toward Asheville with only the infantry. His men burned two bridges on the approach. With word of their approach, Colonel George W. Clayton, Asheville’s highest-ranking officer at the time, called upon the Home Guard to defend the city. The forty-four member “Silver Grays,” who counted among their ranks a 14 year old boy and a 60 year old Baptist minister, were bolstered by about 250 more men that Clayton “bullied, argued, or shamed” into taking up arms to defend Asheville. Clayton gathered the men and two small brass Napoleon cannons and marched them to rough earthworks that overlooked the French Broad route being used by Kirby’s men. When the two forces met at 3 o’clock in the afternoon, they simply lined up and began firing. There was no maneuvering, but gunfire, peppered with a few cannon blasts, continued for about five hours.

Kirby’s men retreated recklessly along the same route they had used for the approach, leaving items such as rifles, canteens, and haversacks in their wake. Kirby’s accounts of the events demonstrate that he was ill-informed as to the strength and numbers of his opponents. Reports of casualties vary from zero to three, but it is said that the following morning the Confederates inspected Kirby’s abandoned position and found one Union soldier’s leg in a boot. Aside from a few entries in the Official Records of the War of the Rebellion, the only details that have survived were related by Forster A. Sondley, who wrote a history of Buncombe County and who also had his Shetland pony stolen and later shot by Kirby’s troops on the way to the engagement.

The site of the breastworks is now part of the campus of the University of North Carolina at Asheville. A controversy still teems in and around Asheville—was the encounter of April 3, 1865, a battle, a skirmish, or an engagement? Placed in context, and with what little is known about the event, the best evidence (contrary to the wording at the head of the marker) would indicate that it fell well short of a battle but is rather more properly seen as an engagement. 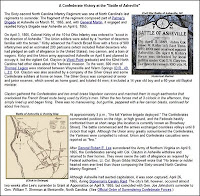 Please consider the following comments and observations when attempting to understand the Battle of Asheville:

1. The Home Guard was only a fraction of the defending force. Elements of other units were brought to the defense. Able bodied convalescent soldiers also took part in the defense of Asheville. Colonel Clayton was able to muster members of other units in the Asheville area to man the defenses. There were about 400 Confederate defenders. Federal forces include companies of the 101st Ohio, other Union troops, partisans, and deserters. Colonel Clayton attended but did not graduate from West Point Military Academy.

2. The earthworks were near the French Broad River, but not overlooking it. Earthworks were located on a hillside, not a field, on Nick Woodfin's farm.

3. A few Confederates were slightly wounded and there were two Union soldiers seriously wounded.

4. Asheville was considered as a location for the Confederate capitol. "Aspired" is an improper word choice.

5. There were incursions by Kirk's men into Buncombe County before the last month of the war.

6. Colonel Kirby had been given several orders: "scout in the direction of Asheville, N.C." was but one of them.

7. You attribute to Colonel Palmer the actions of Colonel Clayton. Colonel John B. Palmer was not present on 06 April, 1865.

8. The guns were under a separate command (artillery).

9. The action was not beside the "French Broad River."

10. No evidence exists of a storm that evening.

11. The truce was agreed to on April 24, but the Federal troops did not return to terrorize Asheville until sunset of April 26, 1865.

12. The armory was already gone; Union troops burned only burned the structure of the armory, the equipment had been long removed and sent elsewhere.

13. The Hyperlink for the 'Battle of Asheville" reenactment is outdated and should not be used for reference.

14. "...found one Union soldier's leg in a boot." This "fact" is unsubstantiated and no such wound or death can be found in Federal casualty reports.

15. The terms engagement and battle can be interchangeable; Asheville was a battle. Not every battle is a Waterloo, or a Gettysburg. Most battles or "engagements" in history have been small affairs with decisive results. The size and duration of an engagement are irrelevant to its definition as a battle or a skirmish. The only two qualifications required to define a battle are (1) an attacking or invading force with intention and objective, and (2) an opposing organized force placed to resist the attacker. This was the case with Gettysburg, Agincourt, and Asheville. A battle may be between as few as two opponents. Neither side has to be destroyed. In general, for a victory to be claimed, it is only necessary that one opponent or the other quit the field. No one, in fact, even has to be killed. Asheville therefore meets all criteria, its mixture of variables being (a) small numbers engaged, (b) extended duration, (c) few serious casualties, and (d) the Federal force quit the field and retreated all the way back from whence they came. The opposing forces at Asheville did not meet by accident, but by design. Therefore, the Battle of Asheville cannot be accurately referred to as a "skirmish."

16. The roadside historical marker, though lacking in detail, properly names and explains the action at Asheville on April 06, 1865. The roadside markers such as this, are not placed on a whim, but only after thorough research has proved the historical significance of the place or event, and the accuracy of the information contained thereupon.