David Lowry Swain (4 Jan. 1801-29 Aug. 1868), lawyer, governor, and educator, was born in the Beaverdam area near Asheville in Buncombe County. His father was George Swain, a Massachusetts native who settled in the Georgia frontier, married, and served in the legislature and the constitutional convention of 1795 before moving to the North Carolina mountains for his health. His mother, Caroline Swain, was the daughter of Jesse Lane, member of a well-known North Carolina family, who moved first to Georgia and then farther west. Her first husband, by whom she had four children, was David Lowry, who was killed during an Indian raid in Georgia. She and George Swain had seven children, of whom David Lowry Swain was the youngest. 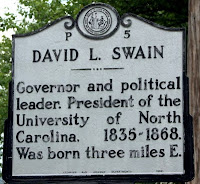