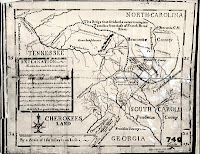 Map shows the boundaries of now-defunct Walton County in what is presently Transylvania County, N.C. Ownership of the county was disputed by Georgia and North Carolina in the early 1800s, resulting in the "Walton War" between the two state's militias. The map also shows Wofford's Settlement in what is now Georgia; at the time of settlement and surveying, it fell within Cherokee Indian lands. Map also shows surrounding areas of Tennessee, North Carolina, and South Carolina, including now-obsolete Pendleton "County" (actually Pendleton District) in S.C. Reproduced from unknown original created circa 1804.

"EXPLANATION: The dotted lines, marked A.B. are parts of a bound[ary] now extinguis[h]ed; and the black lines that has [sic] a dotted [illegible] side of each, represents the existing ones. The line south 52 1/2° east, [several words illegible] from where it crosses the 35° of north latitude to the South Carolina Indian boundary; then south 45° west along the same to the Appalachian mountains; thence generally northerly along the extreme heights of the same to where they a[re] crossed by the said degree of north latitude; thence west along the same to where it is intersected by Meigs's line as aforesaid; are the lines that constitute the boundary of Walton County. The line Z2* is the one agreeable to the treaty of Tellico, 1798."--Inset box. Map has numbers "749" and "242" in lower right-hand corner.
_______________