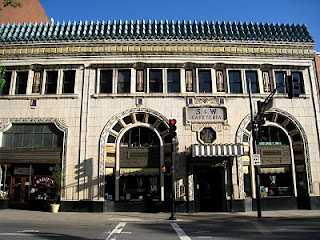 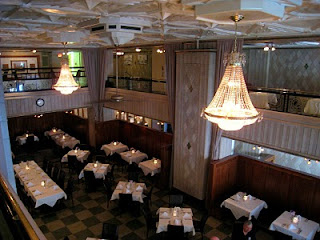 According to an article in the Citizen-Times (16 April 2010), the commercial portion of the S&W Cafeteria building (Haywood and Patton) is back on the market. The S&W Cafeteria was a community gathering place for decades, operating 1929-74. The building, designed by Douglas Ellington, had sat empty for several years before current owner Steve Moberg bought it in 2007.

The following is from Cabins & Castles: The History & Architecture of Buncombe County, North Carolina, Douglas Swaim (1981) at 93:

More than sixty-five buildings in downtown Asheville date from the twenties decade. . . . In the second "great rebuilding" (the first was in the 1890s) was cast an ebullient image of Asheville's future, an image sponsored by a mushrooming population, a frenzied marketplace, and a remarkably cosmopolitan air. Fancifully, if traditionally, ornamented skyscrapers designed by the talented corps of architects drawn here by the boom rewrote the skyline announcing new commercial standards as well as the bloated values of downtown real estate. . . .

One will recall that a new courthouse (the county's seventh) had been constructed on College Street in 1903 leaving architect J. A. Tennent's Victorian Romanesque city hall the focus of an enlarged, and renamed "Pack" Square. In 1926 construction began on the city hall component of the new government center, which once again leap-frogged its way east from the original center of town. Architect Douglas Ellington designed the new City Building in a colorfeast of Art Deco and stylized local motifs. The daring composition won him national recognition but lost him the commission from the conservative county for a new court house.
_______________