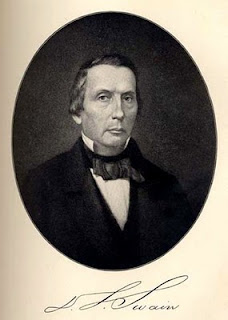 David Lowry Swain (4 Jan. 1801-29 Aug. 1868), lawyer, governor, and educator, was born in the Beaverdam area near Asheville in Buncombe County. His father was George Swain, a Massachusetts native who settled in the Georgia frontier, married, and served in the legislature and the constitutional convention of 1795 before moving to the North Carolina mountains for his health. His mother, Caroline Swain, was the daughter of Jesse Lane, member of a well-known North Carolina family, who moved first to Georgia and then farther west. Her first husband, by whom she had four children, was David Lowry, who was killed during an Indian raid in Georgia. She and George Swain had seven children, of whom David Lowry Swain was the youngest.

The following is from the will of James McConnell Smith (Asheville, North Carolina, 9 February 1850):

I nominate, constitute and appoint my long and well tried friend the Honorable David L. Swain of Chapel Hill and my sons-in-law, Valentine Ripley and Wm. W. McDowell, and my son, John P. Smith, executors of my last will and testament. In witness whereof I have hereunto set my hand and seal the 9th day of February, A. D.1850.

It is probable that the Smith family and the Swain family were neighbors and/or knew each other through attendance at the Newton Academy in Asheville. Also, a sister of David Lowry Swain, Althea Swain, married William Siler. A brother of William Siler, Jesse Richardson Siler, married Harriet Dorothy Patton, sister-in-law of James McConnell Smith. Thus, through marriage, the families were related.
_______________

He married Eleanor Hope White on 12 Jan 1826. Of their children only three grew to adult years, a gifted and supposedly unmarried daughter who died March 1867, a daughter Mrs. Gen. Atkins of Freeport, IL and a son Richard Caswell Swain of Shannon, IL. Several inquiries prompted this posting and hopefully it will clarify the past confusion and uncertainty about this notable North Carolinian. His contribution to the preservation of North Carolina history has been recognized by many historians and is a matter of historical record.

The first lawyer of Buncombe County who was a native thereof was the late Governor D. L. Swain. Born, as has been already stated, at the head of Beaverdam, on January 4, 1801, he was educated under George Newton and Mr. Porter at Newton Academy, where he had for classmates B. F. Perry, afterward governor of South Carolina; Waddy Thompson, of South Carolina, distinguished as congressman and minister to Mexico; and M. Patton, R. B. Vance and James W. Patton of Buncombe County. In 1821 he was for a short while at the University of North Carolina. In December, 1823, he was licensed to practise law and was elected to the North Carolina House of Commons in 1824, 1825 and 1826, and in 1827 was made solicitor of the Edenton Circuit, but resigned this latter office after going around one circuit. In 1828 and 1829 he was again in the House of Commonsfrom Buncombe County; in 1830 he became a judge of the Superior Court of North Carolina; and resigned that office in 1832 on being elected governor of that State.After the expiration of three successive tenns as governor, he became president of the University of North Carolina in 1835, and continued in that place until August 27, 1868, the time of his death. He was largely instrumental in securing the passage of the act incorporating the Buncombe Turnpike company, and to him more than any other man North Carolina is indebted for the preservation of parts of her history and the defence of her fame. His early practice as a lawyer was begun in Asheville. For further details than are given here in regard to the life of this truly great man, the reader is referred to Wheeler's History of North Carolina, and his Reminiscences, and to the more accurate lecture of the late Governor Z. B. Vance on the Life and Character of Hon. David L. Swain.

Governor Swain was tall and ungainly in figure and awkward in manner. When he was elected judge the candidate of the opposing party was Judge Seawell, a very popular man, whom up to that time his opponents, after repeated efforts with different aspirants, had found it impossible to defeat. "Then," said a member of the Legislature from Iredell County, "we took up old warping bars from Buncombe and warped him out." From this remark Mr. Swain acquired the nickname of "Old Warping Bars," a not inapt appellation, which stuck to him llntil he became president of the University when the students bestowed upon him the name of "Old Bunk." He continued to be "Old Bunk" all the rest of his life. While he was practising at the bar the lawyers rode the circuits. Beginning at the first term of the court in which they practised, they followed the courts through all the cou~ties of that circuit. Among Swain's fellow lawyers on the Western Circuit were James R. Dodge, afterwards clerk of the Supreme Court of the State and a nephew of Washington Irving, Samuel Hillman and Thomas Dewes.