Smith-McDowell: The House, The People, and The Land 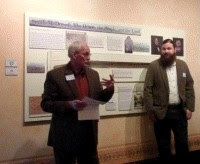 Blue Ridge National Heritage Area grants have supported organizations large and small throughout the region, to date having provided $1.2 million in funding for 70 grantees and leveraging another $2.2 million in non-federal matches. One such grant the Smith-McDowell House Museum in Asheville recently unveiled its new exhibit, funded in part by a BRNHA grant. Titled "Smith-McDowell: The House, the People, & the Land," the exhibit tells the story of the three families associated with the house in the 1800s – the Smiths, the McDowells, and the Garretts – and how their lives show the many ways the land shaped them and they shaped the land.

Built by one of antebellum North Carolina's most influential citizens, the Smith-McDowell House was once the home of mayors, a Civil War major, and friends of the Vanderbilts. Rescued from destruction, Asheville's oldest surviving dwelling is now a National Register property and a window into how life was lived here in the 19th century. Visit the Smith-McDowell House Museum on the campus of A-B Tech in Asheville.

Photo courtesy of the Smith-McDowell House Museum. Board member John Wright and exhibit designer Matt Provencha on the opening day of the exhibit.
_______________