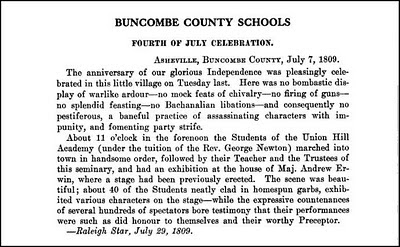 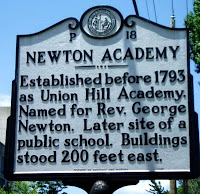 The Union Hill Academy referenced in the above article was established formally in 1805 by an act of the North Carolina General Assembly. However, a school was in operation on the site sometime before 1793. This was Robert Henry's "first school west of the Blue Ridge." On land donated by William Forster in 1793, the school initially occupied a log house, which was replaced in 1809 by a brick structure. That same year the name was changed to Newton Academy in honor of its second master, Reverend George Newton (a Presbyterian minister). The building apparently also was used for religious services, and a cemetery was established on the grounds (believed to be the oldest cemetery in Asheville). Around 1858, the 1809 brick structure was removed, and a new brick academy building constructed.

From 1797 to 1814 Reverend George Newton taught a classical school at the school, which purportedly was famous throughout several states. Reverend Newton lived in the Asheville area until 1814, when he moved to Bedford County, Tennessee, where he was principal of Dickson Academy and pastor of the Presbyterian Church at Shelbyville. He died around 1841.