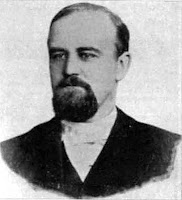 Edwin Wiley Grove (27 December 1850 - 27 January 1927), proprietary drug manufacturer and Asheville developer, was born in Whiteville, Harrdeman County, Tennessee, the son of James Henry and Mary Jane Harris Grove. Both of his parents were natives of Virginia; as a Confederate soldier, his father served with General Nathan B. Forrest. After attending local schools, young Grove went to Memphis, just two counties west, to study pharmacy. In 1880 he established his own pharmacy in Paris, Tennessee, where he had worked earlier as a clerk in a drugstore. At Paris he developed the formula for two products that were to make him a fortune. Grove's

Tasteless Chill Tonic was sold widely, particularly in the South where quinine had long been used as an antimalarial drug. Grove's formula improved the unpleasant taste of the quinine. He also developed a product that he marked as Grove's Bromo-Quinine tablets. Shortly, it was reported, his products were bringing him a million dollars a year. Grove expanded his manufacturing facilities from those originally established at Paris to St. Louis, Missouri, and to England, Australia, Brazil, and Argentina. He also planned an extensive and pioneer advertising program.

Beginning in 1897 when he built a summer home there, Grove spent a great deal of time in Asheville, North Carolina, as he found the climate good for his health. In 1905 he took the first step of what became a large scale development of hotel, business, and residential property on the northern edge of the town. He began with the development of Grove Park, a residential area, and in 1912-1913 constructed 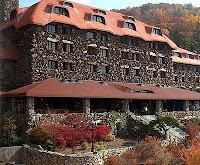 Grove Park Inn as a resort hotel on the west slope of Sunset Mountain. Built of massive stones, with a frontage of almost 500 feet, and rising in a series of terraces, it has long been regarded as one of the finest resort hotels in the world. Grove next purchased the old Battery Park Hotel, razed it, cut down the hill on which it had stood, and erected a new Battery Park Hotel. Opposite the entrance to the new hotel he constructed a mall of shops topped by offices [Grove Arcade]. Earth from the hiss was used to fill a large ravine, which formed a new commercial area for the growing city [Coxe Avenue]. East of Asheville he developed Grovemont residential area. In and around Asheville he also established and developed other areas and businesses. His interests were not centered in just this site, however, for he owned extensive property in St. Louis, Missouri, St. Petersburg, Florida, Atlanta, Georgia, and elsewhere.

Grove was generous and as nearly as possible kept his benefactions secret. Contributing to charitable, educational, and religious causes, he built and endowed a high school in Paris, Tennessee, and endowed a number of Presbyterian churches, of which denomination he was an active member. His first wife, whom he married in 1875, was Mary Louisa Moore of Milan, Tennessee. They were the parents of two daughters, 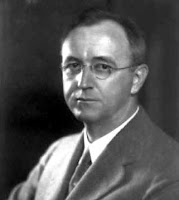 Irma and Evelyn. The latter married Fred Loring Seely who was involved in the building of the Grove Park Inn. After the death of his wife, in 1883, Grove was married to Alice Gertrude Matthewson of Murray, Kentucky. Their children were Hallett Hardin, Edwin Wiley, and Helen. Grove died in Asheville [Battery Park Hotel] and after funeral services in the city's First Presbyterian Church, of which he was a member, he was buried in the family cemetery near his place of birth.

In 1921 E. W. Grove bought the Battery Park Hotel and by 1924 had not only demolished the famous inn which had been the social center of the town in the 1890s, but had actually carted away, load by load, the very hill on which it had stood. Many Ashevillians of the older generation sorrowfully watched the town's western fortification during the Civil War disappear to fill a ravine and thus give the city another street, Coxe Avenue. All that was left was the name Battery applied to the new hotel and to the street. Later Grove constructed the Arcade building, designed for and used as a shopping center until the Second World War, when the Federal Government took it over and later purchased it from the Grove heirs.