A Spire in the Mountains: Ora Blackmun

Note the Buncombe County Bibliography to the left of this site's home page. Scroll down a bit. This is a list of Bunconbe County-related books in the library of Asheville and Buncombe County. Today, a new (actually old) book is being added:

Here is the publisher's description: "Familiar with both the church background and the history of Asheville, Miss Blackmun has been able to take her readers through the changing times in the lives of both and to make clear the constant interplay between them in their 176 years of existence. It is an unusual treatment, but one that makes vivid and fresh the developing patterns of life in the village that became a town and then grew into a city, and it points up the influence of the church upon those life patterns, the influence of a church with a heavenward pointing spire. For all those interested in Asheville or in the First Presbyterian Church or in both, A Spire in the Mountains makes fascinating reading."

[Webmaster's Note: A Spire in the Mountains won the Francis Mckemie Award (Presbyterian Church, U.S.) for the best serious work on the heritage of the Presbyterian church in the South.]
_______________

Our list of books also includes another authored by Ora Blackmun: 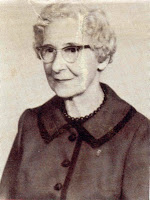 Ora Blackmun was born 13 September 1892 in Minnesota, the fourth child of Frank Wilbur Blackmun and Alice Luther Blackmun. She died 14 December 1984 in Asheville, North Carolina, at the age of ninety-two. Her grandfather (Silas Blackmun) and his two brothers were pioneers in Minnesota and acquired substantial acreage in the southern prairie portion of the state. When a young girl, her parents moved to Fayetteville, Arkansas, where her father owned a fruit farm (near Fayetteville). She graduated cum laude from the University of Arkansas, later being awarded a master's degree. After further graduate work at the University of Chicago and the University of Southern California, she was for some years an associate professor on English at Arkansas State College. Later she became head of the English Department at Flora Macdonald College in Red Springs, North Carolina.

Ora Blackmun moved to North Carolina in 1944. After relocating to Asheville, she served for two years as Director of Christian Education at the First Presbyterian Church. Over the years she contributed numerous articles to newspapers and magazines, and co-authored a college textbook on the history of the English language (The Language We Speak). One of her short stories, "Prairie Grass," won an award bestowed by the North Carolina Federation of Women's clubs. And, two of her Christmas stories were published as booklets with wide distribution. See the list below.

Ora Blackmun became intensely interested in the history of Western North Carolina, and spoke, lectured, and wrote extensively about her adopted region.
_______________