"Did you know Zeb Vance was buried three times, and not one time with Masonic rites? His second wife refused to allow the Masonic team to perform the rites they had rehearsed at Mount Hermon [Masonic Lodge] 118. Later she secretly had her husband exhumed and reburied in her Martin family’s plot nearby in Riverside Cemetery. When Zeb’s sons found out, they took their stepmother to court, got a judgment, had their Dad dug up again and reburied him where he started out. Brethren Zeb is still exploding with laughter at the thought that even in death he was a traveling man."

The following is from The Heritage of Old Buncombe County, Doris Cline Ward, Editor (1981) at 84 (Article #65, "Zebulon Baird Vance" by Luther W. Shaw): 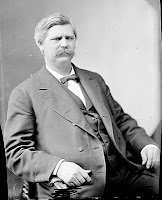 Zebulon Baird Vance, whose handsome portrait hangs in the Superior Courtroom of Buncombe County Courthouse, was North Carolina's Civil War governor. Born on Reems Creek May 13, 1830, Vance attended Newton Academy and the University of North Carolina. He began law practice in Asheville in May 1852. Two years later, he was named Buncombe's representative to the N. C. House of Commons and during 1856-1860 served in the U. S. House of Representatives. A captain and colonel in the Confederate Army in 1861, Vance was governor of North Carolina from 1862-1865 and again in 1876. He was elected U. S. Senator from North Carolina on March 4, 1879 and served until April 14, 1894, when he died in Washington, D. C. He is buried in Asheville's Riverside Cemetery.
_______________

Zebulon Baird Vance was born in Buncombe County, N.C., on 13 May 1830, one of seven children born to Margaret Baird (1802-1878), daughter of Hannah (Erwin) and Zebulon Baird, and David Vance (1792-1884), son of Priscilla (Brank) and David Vance. He attended Washington College and the University of North Carolina, where he earned a law degree. In 1853, Vance married Harriet Newell Espy (1832-1878), called Hattie. She was the only child of Mary Louisa (Tate) and Thomas Espy. Harriet and Zebulon Vance had five sons, one of whom died in infancy. In 1880, after Hattie's death, Vance married Florence Steele Martin, a widow with one son.

At 24, Vance ran for and won a seat in the North Carolina State House of Commons; in 1856, he was defeated in bids for State Senate and Congress, but was elected to the United States House of Representatives in 1858. As a supporter of the Union and states rights, he resigned his position when North Carolina appeared to be leaning toward secession.

During the Civil War, Vance was a captain in the 14th North Carolina Infantry Regiment and a colonel in the 26th North Carolina Infantry Regiment. In 1862, he was elected governor of North Carolina, where his efforts on the behalf of his constituents earned him the nickname "War Governor of the South." He was reelected in 1864, arrested by Federal troops in 1865, and later returned to the practice of law. In 1870, the state legislature elected him to the United States Senate, but since he was still under parole, he could not serve. He was reelected as governor in 1876 and United States Senator in 1879, in which capacity he served until his death on 14 April 1894.