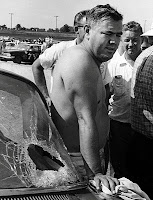 Certainly so nowadays. But just such a thing happened many years ago, and I was there as a young reporter to see it. The date: Aug. 13, 1961. The site: Asheville-Weaverville Speedway, a half-mile track in the Blue Ridge Mountains. The event: The Western North Carolina 500. Trouble developed almost immediately after the green flag as the speedway’s asphalt began tearing apart. Flying pieces of pavement soon were pummeling the race cars and even some fans among an estimated 10,000 on hand. Rather than going to the press box, I sat in a concrete grandstand along the frontstretch with my new bride. I vividly recall an acquaintance from high school in nearby Burnsville, Louetta Randolph, being hit in the temple by a baseball-sized bit of asphalt that had flown over the fence. Louetta, dazed, was taken to an Asheville hospital as a precaution. She wasn’t seriously hurt. The race rolled on with Junior Johnson dominating in a Pontiac. Junior seemed able to avoid the potholes better than his rivals, perhaps traceable to experience from his years of hauling moonshine on rutted, backwoods roads. Johnson started on the front row with fellow Pontiac driver Joe Weatherly, the pole winner at 65.704 mph. Junior grabbed the lead on the first lap and didn’t relinquish it. He eventually charged three laps ahead despite having a large chunk of asphalt puncture a hole in the windshield right in front of his face.

Relatively feeble efforts were made to repair the pavement, all to no avail. With the race under a red flag on the 208th of the scheduled 500 laps, NASCAR official Pat Purcell told the drivers and their crews the race would end after 50 more laps. The drivers were to get a final red flag and the checkered flag simultaneously. Best I recall, no announcement of the decision was made on the track’s loudspeakers. So it was a surprise to many fans when Johnson was flagged the winner on Lap 258. And it riled about half those in the crowd at the speedway, destined to shut down in 1969. Some started screaming and yelling in protest. “I’ve seen half a race, I want half my money back!” one obviously inebriated guy kept hollering. Not surprisingly, promoter Gene Sluder had left the premises much earlier with the gate receipts. The protest grew in intensity. It quickly became a riot when a large logging truck was pushed onto the cross-over point leading to the infield and pit road. The track had no tunnel, so the competitors were trapped inside. A would-be mediator appeared from the midst of the irate throng. He was picked up and thrown into a pond. Additional law enforcement officers – from the Buncombe County Sheriff's Office and the N.C. Highway Patrol – were summoned. But they were outnumbered and could do little.

As dusk neared, a few crewmen went to the spot where the route out was blocked, hoping to reason with the fuming fans. It didn’t work. Some people had come to the speedway atop a long, low-lying ridge hoping to see controversy. At the time, NASCAR founder Big Bill France was battling a group of drivers – led by pioneers Curtis Turner and Tim Flock – who wanted to affiliate with the Teamsters Union. It had appeared a showdown would take place at the WNC 500. But Turner and Flock weren't at the track that day. Rowdies decided to create their own controversy. Finally, one of them made a big mistake.

“I remember it vividly,” says Johnson. “We’d lost patience, and one of the crew fellers, Pop Ergle, went to the gate to tell 'em we were coming out. “A riot ringleader had a two-by-four, and he poked Pop in the belly with it. Well, Pop, who worked for the team owned by Bud Moore, was a giant of a guy at about 6-6 and 285. "Pop took the board away from the guy and started swinging it. Before long, the place cleared out and we left.” Not a single refund – and no ransom – was paid.