Fess Elisha Parker, Jr. died this week (18 March 2010). He was born 16 August 1924 and is best known for his fictional portrayal of David Crockett on the Walt Disney "Davy Crockett" television program during the 1950s. While no connection is known between Fess Parker and Buncombe County, we do have a David Crockett connection.

The second wife of legendary David Crockett (1786-1836) was Elizabeth Patton (1788-1860). They were married 22 May 1816, both entering second marriages after the death of a spouse. Elizabeth Patton was born in Buncombe County's Swannanoa Community to Robert and Elizabeth Patton.

Elizabeth Patton, born in Swannanoa on May 22, 1788, married, first, her first cousin James Patton, son of Elijah, her father's brother, and they moved to Tennessee. He was mortally wounded in the Creek War and died in 1814. She married (2), David Crockett, and they also settled in Gibson County, Tennessee, and they had three children. 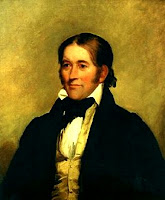 The Swannanoa Valley was the home of Robert Patton, father of Elizabeth Patton, the second wife of David Crockett (portrait left). Patton was a large landowner in the highlands above the Catawba River in what was at the time Burke County. Crockett visited this home on several occasions and was well known in Swannanoa and the surrounding area. By his own account, Crockett did well in his second marriage, which came in 1816. Elizabeth was "a good industrious women," wrote Crockett, "and owned a snug little farm [in Tennessee] and lived quite comfortable." She had Patton as both her maiden name and her married name from her first marriage. She had married her first cousin James, the son of Elijah Patton, a brother to Robert. Crockett visited the Patton home in Swannanoa Valley on several occasions during their marriage. One story tells that a large oak called "the Target Tree" stood in front of the home. Robert Patton and Crockett, his marksman son-in-law, reportedly held shooting matches there. Most historians concur that David and Elizabeth married in Bean's Creek, Tennessee, where he pursued her as a suitor.

In 1853, the state of Texas issued a land warrant to Elizabeth Patton Crockett for her martyred husband's service in the war for Texas independence. She was awarded 1,280 acres in north Texas, where Indian attacks were still common. She arranged for a surveyor, who bargained for half the land, given the risk involved. That left her with 640 acres on Rucker's Creek. Some accounts say she received a parcel of 640 acres, which was cut in half in the bargain. However, the enticement to freedom fighters in the Texas Revolution was "a league and a labor" of land. A league was two square miles -- that is 1,280 acres. A labor, or labrado, was a small garden plot.

Elizabeth Crockett moved to Texas with her son Robert and daughter Matilda. She lived there for seven years in a log cabin, always wearing black, as she had since learning of Crockett's death in 1836. On January 31, 1860, at the age of 72, she left the cabin for a walk and collapsed dead. She was buried in the Acton Cemetery. Elizabeth Patton Crockett Acton State Historic Site is the smallest state park in Texas, at 12 feet by 21 feet. The 28-foot marble monument of a bonneted pioneer woman shading her eyes to scan the horizon for her husband's return, was unveiled in 1913. 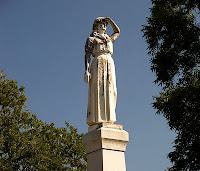 She arrived in North Central Texas early enough (1853) to be among the first of the white settlers, early enough to suffer all the hardships and grief that the frontier had to offer. Hood County was yet to be chartered; land surveyors were busily shuttling back and forth from Comanche and Kiowa country to Austin with maps and hopes of striking it rich with new land speculations. We do not know exactly how the widow Elizabeth and her group of west Tennessee farmers got to Texas. Probably they followed the same route that her dead husband David had followed 17 years earlier - down the Mississippi to the Arkansas river and somehow overland to St. Augustine or Nacodoches in east Texas then up the Trinity.

The Texas national government had awarded 640 acres of land to all men who had fought in the war for independence from Mexico, so David Crockett's widow Elizabeth , her sons George and Robert, her daughter, Rebecca Halford and their respective families came to find and claim David's grant. We know that the group had to spend nearly a year near Waxahatchie before finding a land surveyor to take their claim and convert it to real land somehow. When this was finally done in Austin, they found that the 640 acres was shrunk to 320 - the cost of the survey. Since land was selling for a dollar or two per acre in the area, the survey cost was probably reasonable considering the dangers of Indian intervention. The grant they moved to was about 4 miles north of a growing trading post now called Acton, east of the Brazos river on Rucker's creek. The land was more suited for rangeland than for cultivation; nevertheless Elizabeth set about making a new home.

Robert built a two-room log cabin for his mother and the family. Within two years, another cabin had been built for Elizabeth. She was then 65 years old and continued to do her share of the farm work. By the time the Civil War had begun, Robert and his wife Matilda Porter had nine children; some stayed in what is now Hood County, and some migrated north and south. One of Elizabeth's grandchildren was killed during a robbery when he was returning from the War. Rebecca Halford, Elizabeth's daughter was widowed in 1863. Another daughter, Matilda, stayed in Tennessee and never again saw her mother

By all accounts, Elizabeth was an intelligent lady who knew about business and farming matters. It was through her industry that her husband David was able to establish a mill and distillery in Tennessee. They were relatively prosperous until a flood destroyed the works. There are no known letters in Elizabeth's artifacts, although it has been said that she could read and write well, unusual for a frontier woman of the times.

Elizabeth Crockett died after an early morning walk from her cabin, at age 72. She was buried in the Acton cemetery. Her remains and that of several family members are in what constitutes the Acton State Park and Monument, the smallest Park in Texas. Her statue above the grave shows her looking to the west, eyes shaded, waiting for her husband to come home from the War.