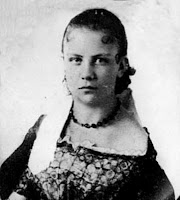 During the last days of the Civil War, Union troops under the command of General Smith D. Atkins occupied Chapel Hill. When the general called on President David S. Swain, the president introduced him to his daughter, Eleanor, then twenty-one years old. Atkins was so taken with Eleanor that he ordered his regimental band to serenade her every evening and presented Swain with a gift of two horses, one for him and one for his daughter. As Atkins departed Chapel Hill, Eleanor announced their engagement, and the couple married in August 1865. Confederate supporters disapproved of their romance and accused the Swains of betraying the South.

In a letter dated 12 May 1865, Ella stated: "I had nothing to hide when the Yankees came among us except my self, this I had no fear of being stolen, but see the result!"

Smith Dykins Atkins (1835-1913) was born in Horseheads, NY, and educated at Rock River Seminary in Mount Morris, IL. He was admitted to the Illinois bar in 1854 and enlisted as a private in the Eleventh Illinois Infantry in April 1861. He attained the rank of captain in 1861, major in March 1862, and breveted brigadier general in January 1865. After his marriage to Eleanor Swain the couple moved to Freeport, IL, where Atkins became postmaster and editor of the Freeport Journal. They became the parents of a daughter Eleanor Hope.
_______________

David Lowry Swain (1801-1868) was the youngest son of Caroline Lane and George Swain, a farmer. He was born in Buncombe County, NC, and educated at Newton Academy in Asheville, NC. He was admitted to the junior class at the University in 1821 but remained only one week. Reluctant to spend his parents' scarce resources, he went to Raleigh to read law under Chief Justice John Louis Taylor, then returned to Asheville in 1823 to begin his law practice. He married Eleanor White in 1826; they became the parents of three sons, two of whom died in infancy, and two daughters. Buncombe County voters sent Swain to the NC House of Commons four times between 1824 and 1829, when the legislature appointed him judge of the superior court. In 1832 Swain became governor, a role that allowed him to represent western North Carolina interests; promote internal improvements such as roads, railroads, and schools; and reform the state's constitution by bringing together in 1835 a coalition of the state's Whigs and Democrats. Despite his political success, the predominantly Democratic General Assembly of 1835, the last to elect North Carolina's governor, denied Swain a fourth one-year term. He became president of the University in 1835, a position he held until his death in 1868 (Dictionary of North Carolina Biography 5:483-86). Students referred to Swain as "the Governor" or as "Old Bunk."
_______________